After the divorce was called off, Charu Asopa and Rajeev Sen share adorable photos with their daughter Ziana 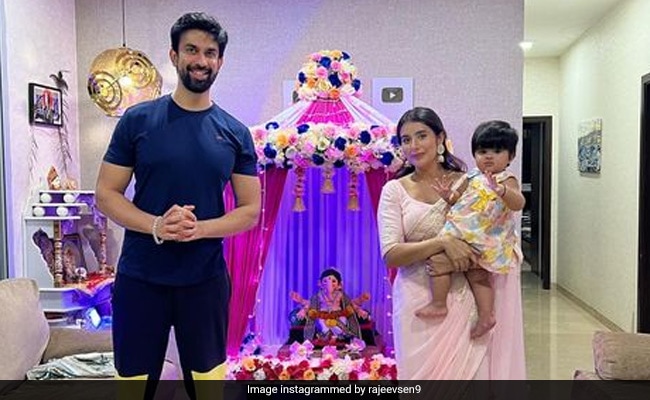 After announcing the continuation of their marriage, Rajeev Sen and Charu Asopa shared new posts on their Instagram profiles featuring their daughter Ziana. Some of the photos are from their Ganesh Chaturthi celebrations, while others are from their date with Rajeev’s mother, Subhra Sen. In the photos, Rajeev and Charu pose together for the camera with their daughter. Charu looks beautiful in a pink saree, while Rajeev keeps it casual in a blue outfit. Sharing the post, Rajiv dropped the heartfelt sentiment. Charu shared various photos from the same day.

On Thursday, Charu Asopa and Rajeev Sen, Sushmita Sen’s brother, shared a statement on their Instagram profiles stating that the couple are holding on to their marriage and revealed that they are considering divorce as an option. However, considering their daughter’s upbringing and happiness, they give their marriage a second chance.

Shortly after Charu shared the post, Sushmita Sen commented, “I’m so happy for all three of you!!! Dugga Dugga Shona!!!”

An excerpt from their letter read, “Yes, we went ahead and announced that we were ending our marriage and realized we had hit a dead end and nothing to get past it. Divorce was an option we were considering and we wouldn’t deny it.. happy about it. We announce that we have decided to keep our marriage forever, We are both blessed with a beautiful daughter Ziana and we would like to give her the best as parents. Her upbringing and happiness is our number one priority..”

Earlier, they shared happy pictures of Ganesh Chaturthi. Check out the jobs below:

Rajiv Sen and Charu Asoba married in 2019 and welcomed their daughter last year in November.