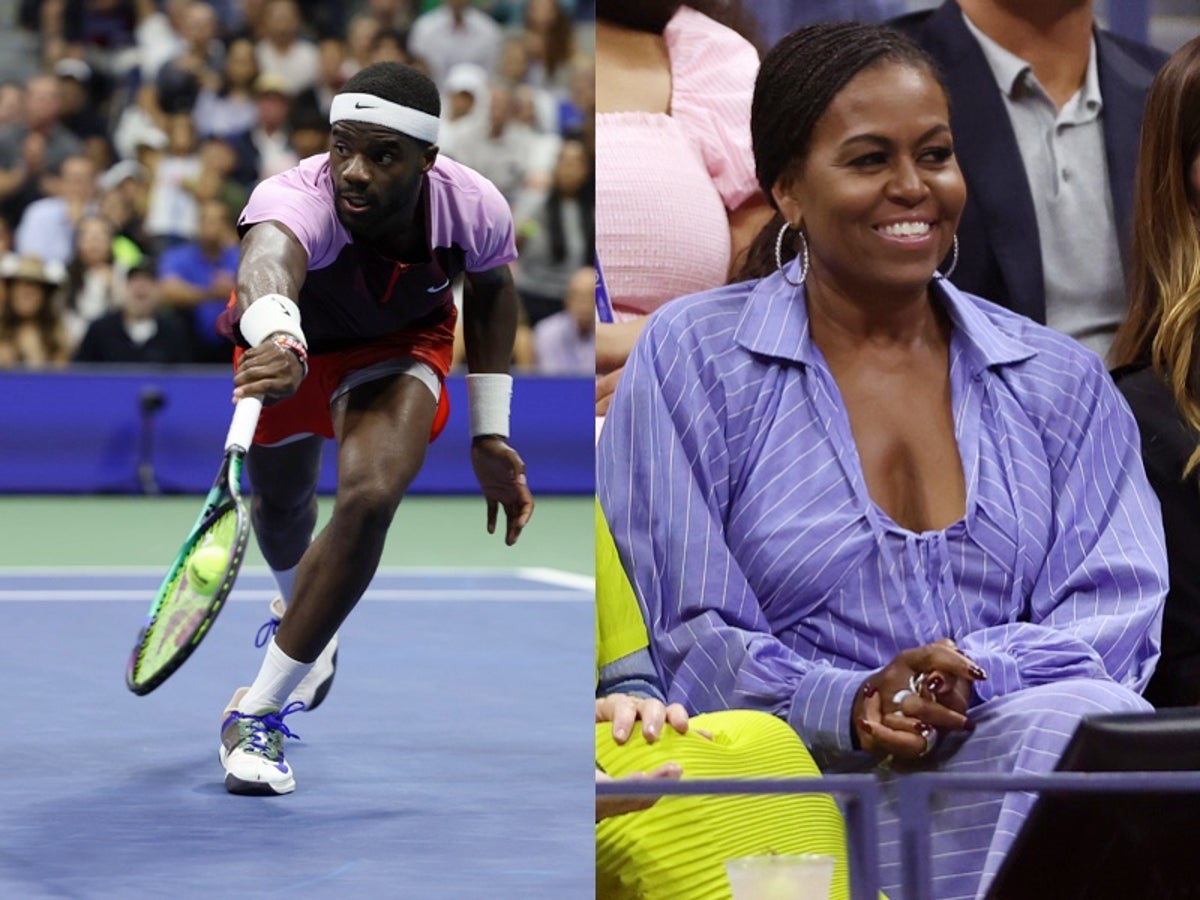 While Frances Tiafoe had an incredible run at the US Open, the American tennis player has revealed that seeing former first lady Michelle Obama in the stands was the best part of the tournament for him.

“Tons of different emotions, obviously. Best two weeks of my life, but probably the best thing is seeing the first lady Michelle Obama after the match,” he told Good Morning America host Robin Roberts on Monday. “I was on the one changeover and I looked and she looked at me – and then when they announced her and seeing the crowd erupt, that was pretty impactful.”

On Friday, Tiafoe lost to No 3 seed Carlos Alcaraz in a match that lasted five sets and for over four hours. After his defeat, Tiafoe shared his hilarious reaction to seeing Michelle Obama sitting front row at Arthur Ashe Stadium in New York City.

“I mean, I seen her like 2-1 in the first, kind of turned my head right,” he told reporters after the match. “She looked at me. Before they announced her, put it on the Jumbotron, I already seen her. Everybody was pointing at her.”

Tiafoe, who was struggling on his return to Alcaraz, remembered thinking, “Yeah, she thinks I’m a bum, can’t make a return!”

“Seeing her there was crazy,” Tiafoe added. “Obviously, there was a lot of who’s who in there tonight. Obviously, we all know what she means. Crazy.”

Although he ended up losing to Alcaraz, the tennis player said he got to meet with the former first lady after his match. In one video shared by CBS News, Obama is seen offering some words of encouragement to Tiafoe after his loss and congratulating him on a job well done.

“You’re amazing, have been amazing, made us all so proud,” she tells the tennis star.

“That means a lot,” he replied.

When Obama tells Tiafoe that she hopes he had fun regardless, he explains that he had “a lot of fun” but is still pretty tired.

“I can only imagine,” the former first lady answered.

Tiafoe, whose parents were immigrants from Sierra Leone, grew up sleeping in a spare room at a tennis centre where his father was a caretaker. When Tiafoe and his twin brother Franklin began receiving tennis lessons at the centre for free, he quickly fell in love with the sport and was scouted by coach Misha Kouznetsov.

Earlier this week, Tiafoe said he hopes his very own “Cinderella story” can inspire others to follow their dreams.

“That stuff gets me emotional, for sure,” he said. “Seeing people screaming your name, just loving what you’re doing. That’s awesome. That’s what it’s all about. Everyone loves a Cinderella story. I’m just trying to make one.