‘He’s one of us’: Lionel Messi’s hometown in Argentina yearns for World Cup victory
Advertisement 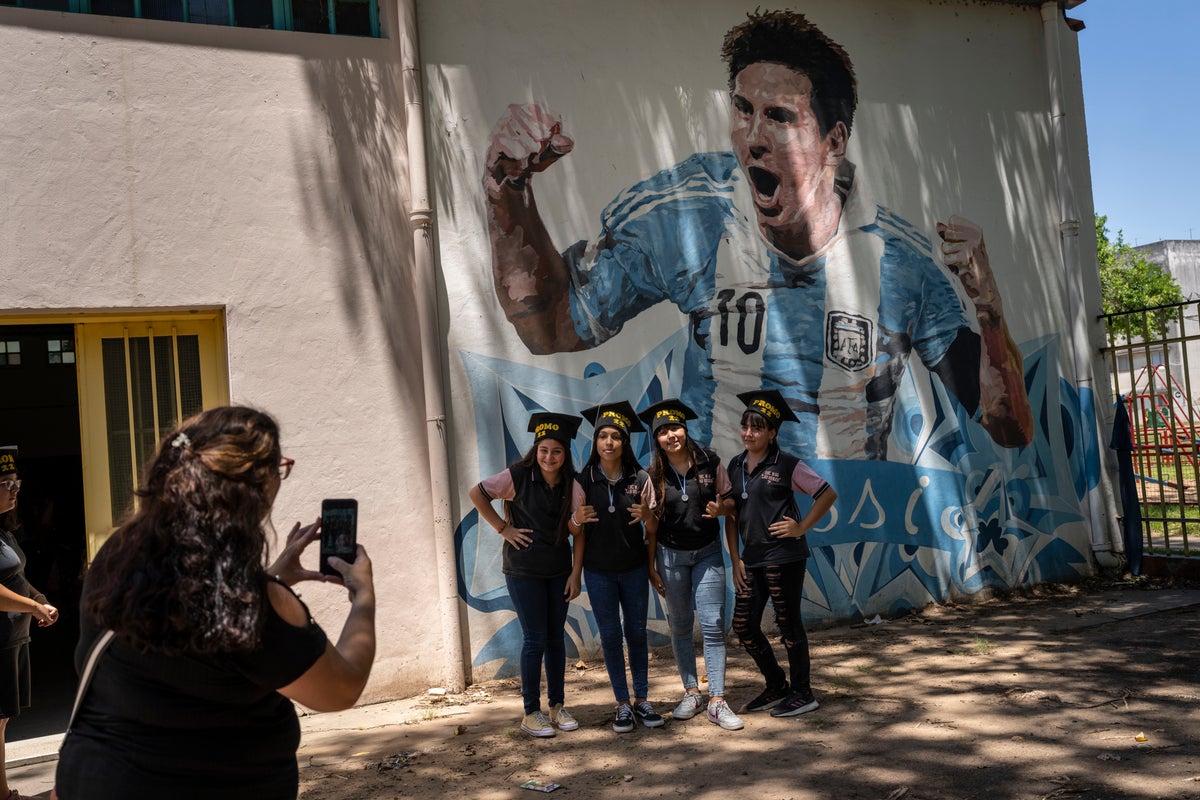 Fernanda Quiroga still remembers how Lionel Messi played soccer on what were then dirt roads around his working-class neighborhood in Rosario, Argentina’s third-largest city.

Excitement for Sunday’s World Cup final, when Argentina take on defending champions France in Qatar, is building rapidly and anxiety is particularly high in Messi’s hometown as many hope this will be the year in which Messi finally wins the great trophy that he was missing. of his illustrious career.

“Although it hurts all of us, it is said that this is Leo’s last World Cup, so we all hope he wins it, I think more for him than for the national team itself,” Quiroga said. “I think the biggest thing this time is that we want him to make it because he’s generated a lot of love and respect.”

After beating Croatia in the semifinals on Tuesday, Messi said Sunday’s match would likely be his last at a World Cup.

The neighborhood popularly known as La Bajada has become a sort of altar for Messi with murals and graffiti extolling the soccer star.

“From another galaxy and from my neighborhood”, reads an apparently ubiquitous graffiti in the area.

A large mural of Messi looking up at the sky is painted on the side of his old house that still belongs to his family.

“The little boy was very spicy. If he got angry, he would grab the ball and take it away from him,” said Marcelo Almada, a 37-year-old bricklayer who played with Messi in the streets of the neighborhood where he still lives. “He didn’t like to lose… but he was a very good boy.”

With the World Cup “there has been a neighborhood explosion”, where “we are all like brothers”, he added, recalling that after each Argentina victory people celebrate in the streets until the wee hours of the morning.

The neighborhood has also become a place of pilgrimage, with fans from all over the world coming to visit Messi’s old house and the small soccer field on the corner where he began to learn the skills that would eventually make him a great of all the times. .

“I have been a fan of Barcelona and Messi since I was a child and… my dream is to see Messi win (the World Cup),” said Niv Reznik, 23, an Israeli who traveled to Argentina with a group of friends to watch the tournament in the homeland of the soccer star who played 17 seasons for Barcelona.

When Reznik and his friends arrived at Messi’s house, one of them knelt down and waved his hands in applause.

A few blocks away, another person hoping for a Messi win is Andrea Liliana Sosa, 55, who was Messi’s fifth- and sixth-grade math and science teacher.

“He was a calm and dutiful student, responsible for what he had to do at school and very loved by his classmates… especially during recess to play ball,” Sosa said in one of the classrooms at the school that has the painting. chipped on many of its walls. “He was very focused on football.

“(A win on Sunday) would be like the cherry on him, so let’s hope he gets it, but he’s already done enough to be recognized and loved by everyone.”

Schoolchildren live the World Cup “with a beautiful passion” and want Argentina to win “for Messi,” said Milena Fernández, a 13-year-old student who was standing in front of a large mural of the soccer star at school. gardens.

Across the street from the school, another large Messi mural graces the side of a residential building that has also become a pilgrimage site for fans.

“We have even seen people praying here,” said Valentina Rota, 21, who lives in the building. “There is a whole feeling of belonging because he was born around the corner, he is one of us, he is a neighbor.”

Messi, and the team as a whole, have managed to awaken the hope and optimism of Argentines in a country that has been economically stagnant for years with one of the highest inflation rates in the world, close to almost 100% per year. and where nearly four out of 10 people live in poverty.

“Everyone wants Messi to win and that generates a community, a very nice feeling that is very rare in Argentina, which is always fighting, divided, angry, frustrated,” said Diego Schwarzstein, an endocrinologist who treated Messi for deficiency of growth hormone until He left for Barcelona at age 13 after the European club promised to pay for his expensive treatment.

In Rosario, a city marked by drug violence, that feeling seems even more pronounced.

“You kind of forget about the murders, the robberies and all the other things that are going on,” Sosa said. “This distracts us a bit.”

Of course, it’s not just a distraction. For those who have followed Messi’s career from the start, a victory on Sunday would mean the culmination of a lifelong dream, as the star himself has spoken about the importance of winning a World Cup title.

“Even though he is now a rock star, has a beautiful family, a beautiful wife, a large bank account and a lot of popularity, his path was not covered in rose petals,” said Dr. Schwarstein. “Those of us who know that path, and know how important this Cup is for him, deeply hope that he has it.”

In La Bajada, the neighbors are hopeful that if Messi wins on Sunday he will return to his old house to visit.

“We all have the dream of him coming back,” Quiroga said. “It is a very strong desire, especially for the youngest who have heard that we all know him and want to know him too. There is a great expectation for his return and I believe that one day it will happen, either now or later. This is his house, his family’s house, let’s hope it happens.”