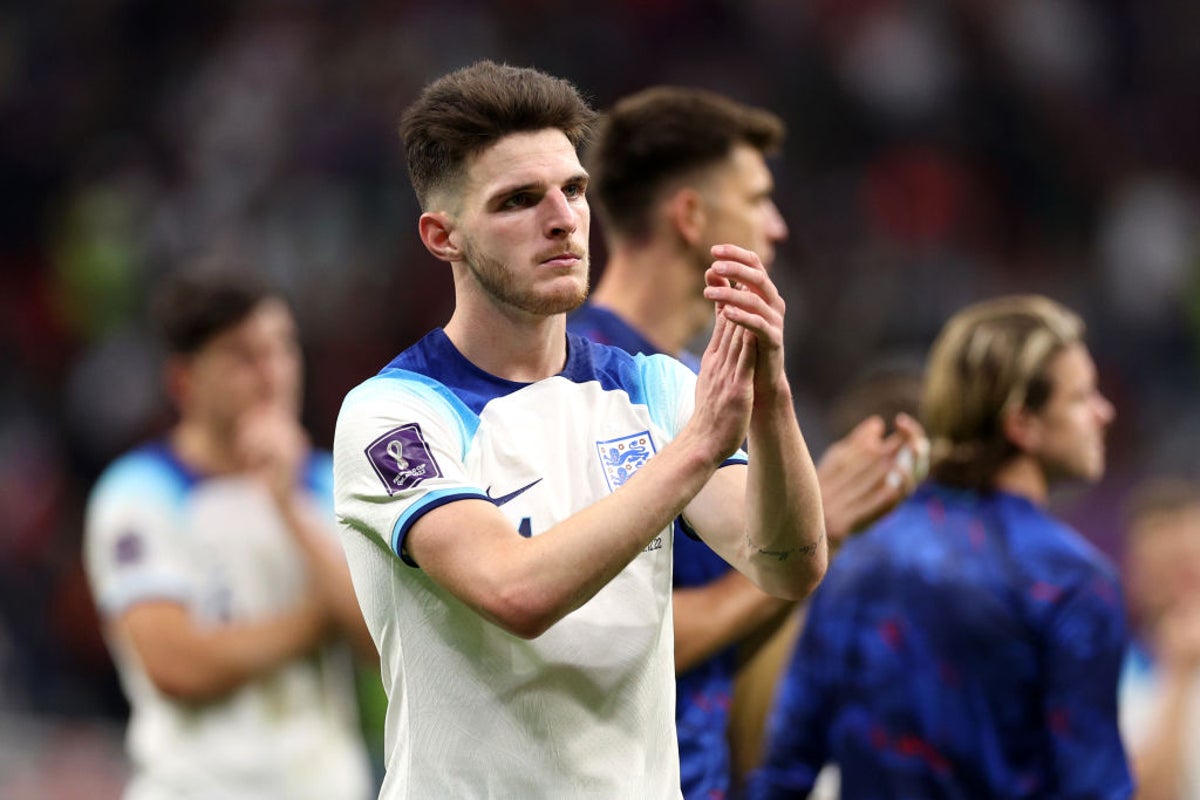 Declan Rice says he is “distraught” that England really believed this would be their year and that they “lost the best team”, while expressing the team’s wish that Gareth Southgate stay on as manager as he has created something “special” that players “love”. be involved with

The midfielder felt Southgate hit the nail on the head in terms of game plan in the 2-1 quarter-final loss to France, especially as Kylian Mbappe was so “cool” and both goals came late in the game. Rice also said England were “not happy” with some of the decisions, but would not say anything more about the referee.

“I think you can see in my face right now that I’m distraught because we really believed that this year could be a year,” he said.

“Obviously we made it to a Euro final, we’ve really progressed well as a team in recent years and we really felt like a team, we weren’t overly confident, but we were confident enough to know we could get out there. and beat France and that’s the change in mindset that England hasn’t had over the years.

“I really hope [Southgate] he stays because the core group we have and what he’s done for us, it’s very special to be a part of it, I love playing with him and I love playing for England. He put everything back in order. Is not in the. It doesn’t depend on him at all: the tactics were right, we played the right way.

“We were aggressive, we stopped Mbappé, he was silent. In the end, as I said, there were two goals against the course of the game and that doesn’t depend on the coach, it depends on us on the field.

“We have dominated the game, apart from their two goals. I don’t really remember them creating much, we play great football but it’s a small margin game. We win together, we lose together. It’s obviously very difficult to process right now. We have come so far, I think that is to the credit of the coach, the spirit that he has brought to this team and the unity we have.

“As I said, we weren’t overly confident, but we were confident enough that we could actually win this tournament and that’s not the mentality England have had over the years. You could see that in our performance, we were really aggressive, we created a lot of chances: we scored a great penalty, we missed another, but that’s football. It’s obviously very hard to accept right now. Losing a quarter-final against France is very hard”.

While there were questions about referee Wilton Sampaio, Rice did not elaborate on that.

“It’s difficult, you can’t really talk about the referee. We are individuals, we are the ones playing the game. He is the one who officiates. Obviously, we are not happy with some of the decisions, but at the end of the day, we are the ones who lost the game. So let’s take responsibility for that. I think the only clear thing was the penalty that wasn’t scored and some free kicks that didn’t go well for us in crucial areas, but we took it with our chins”.

Rice feels the campaign bodes well for the future, especially with so many young players, which is another reason Southgate should stick around.

“If you look at the team, we are very young, but we have a lot of top-level players. We reached a semi-final, a Euros final, obviously we stayed here in the quarter-finals, but in my opinion the best team lost and that shows how far we’ve come.

“I think sometimes the negativity around us will go away once we’ve gained something again, I think there’s always going to be that pressure on us, but I feel like it’s starting to influence in that way that we’re getting back to a level where people are believing in we and the country support us.

“A few years ago it wasn’t like that, so we can be very proud of ourselves as a group. But we have to go again because ultimately international football is based on what you win; we haven’t won in years, so that’s what we want to try to do. I think there are so many players here 19, 20, 21 years old who are stepping onto the biggest stage.

“We are England, the mentality has changed now as I said, and we will be back for sure.”

Rice revealed what Southgate said in the locker room afterward, but that none of it was about his future.

“He said he is very proud of us and Steve is too. [Holland], so proud of us as a group for how we have been, how we have applied ourselves in the last month, what we have given in training. Some of the guys who haven’t had a minute, every day around the group.

“Everything, backroom staff, everyone, if they could come in and see how well everyone has done, they would have thought we would have come all the way as a collective, but for me personally, I hope it stays.

“I really hope he stays because the core group that we have and what he’s done for us, it’s very special to be a part of. I love playing with him and I love playing for England.”