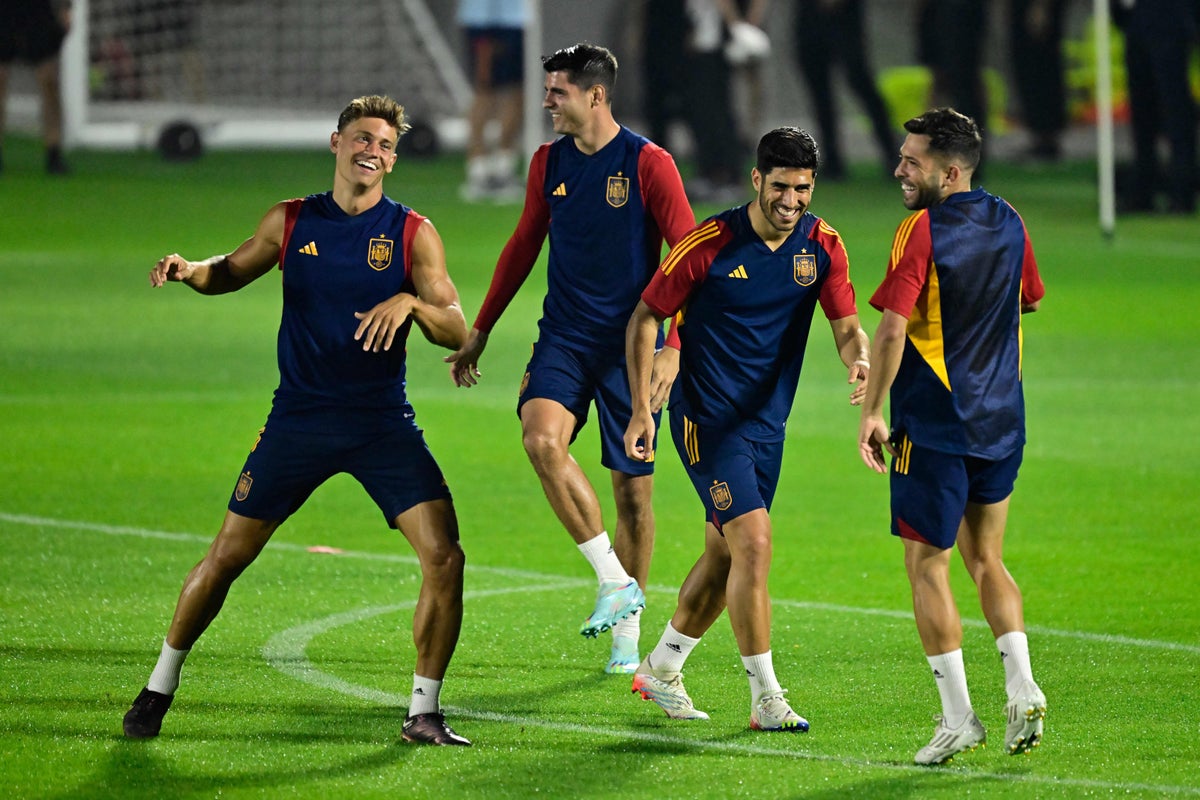 Spain are looking to clinch the top spot in Group E at the 2022 World Cup with a win against Japan tonight.

Luis Enrique’s side took a hit from Germany last time but are still set to finish first if they can beat Japan, who were stunned by Costa Rica and must win here to have a chance of reaching the last 16.

The 2010 champions need a point to guarantee their qualification to the round of 16, while half an eye will be in the other Group E match between Costa Rica and Germany.

“We have to think that we are at the top of the so-called Group of Death and we have to stay positive,” Spain coach Luis Enrique said before the match.

Follow all the action with our live blog below

The players are back from their warm-ups, just 10 minutes from kick-off at the Khalifa International Stadium!

The 2010 champions need a point to guarantee their qualification to the knockout phase, while in half sight it will be in the other Group E match between Costa Rica and Germany!

“Football is a show, as if you were going to the theater. The fans want to see goals, entertainment. This is how I interpret football. Other coaches don’t share this, it’s okay, but it’s what I like. We don’t focus on the result, we focus on our path. It is good vibes, optimism and joy. Maybe it’s an excess of optimism.

“If something goes wrong and I get fired, that’s fine. But if this form fills my players with optimism, I am satisfied. Until I’m proven wrong, we have to keep thinking that we are the better team and that we will play seven games and win. It may not be true, but that is our goal.

“Imagine that we think that the runner-up is better and we have reached the 90th minute with a good 0-0 tie, but then, with five seconds to go, Costa Rica and Japan both score. In the last 15 seconds, we’d be out! Or Germany could win 5-0. Just imagine!

“We are here to win seven games and win the group. It could be Brazil in the quarterfinals but that’s okay. Let’s play Brazil. At the elite level, we cannot speculate. Could avoiding Brazil be easier? Easier in soccer? What’s that? To win a World Cup you have to beat everyone who comes your way. That is your goal. It’s soon all or nothing. The winner goes home. That is the greatness of football”.

A draw that could show why a flourishing Spain will not be able to win this World Cup and prevent Germany from being left out. It is that fine a line, of an exciting 1-1 draw.

Hansi Flick’s side need a lot more than that in their next game against Costa Rica, and also a favor from Spain against Japan, but they should feel considerable relief here. They have survived. They have persevered. It’s remarkable to think that these teams came into this World Cup as equals, and that this game ended in a draw. Spain was a much better team, as shown by their positions in the group. But Luis Enrique’s team also has its flaws, as evidenced by the way in which they gave up this win.

By mark critchley at the Al-Rayyan Stadium

Japan came to Qatar hoping to atone for their most infamous visit to this country, when a 2-2 stoppage-time draw in a 2-2 draw with Iraq on neutral ground during World Cup qualifiers in 1994 denied them their first place in history. a final There have been seven consecutive qualifiers since then, a remarkable rise to become an established footballing nation, but if they go without reaching the last 16 of this tournament, they will be left to mourn this loss as their new ‘Doha Tragedy’.

After their exceptional victory in the first round of group play, not to mention the 7-0 defeat of Costa Rica, this was an opportunity for Japan to secure a place in the round of 16 and increase the pressure on Germany before his encounter with Spain later. tonight. Instead, Keysher Fuller’s 81st-minute goal has turned Group E upside down and produced a plausible scenario in which all four teams reach the final round level on points.

Hajime Moriyasu may try to look on the bright side and philosophize that three points after two games is par for the course. But in the cold reality of a World Cup, as Moriyasu and his players bow in apology to their supporters at the Ahmad Bin Ali Stadium, the only conclusion to be drawn from a gritty duel with a sensational finish is that your team has wasted the gold trophy. opportunity presented by defeating Germany.

Meanwhile, Costa Rica is still almost alive thanks to Fuller. The looping shot from the right-back barely missed goalkeeper Shuichi Gonda’s outstretched palm. The opportunity had only presented itself because Yeltsin Tejeda took advantage of a mistake by Hidemasa Morita. It was an ugly goal to win an uglier game, but just what Luis Fernando Suárez’s team deserved for a disciplined game plan.

But it had nothing to do with football.

Luis Enrique said that Sunday would have been the 13th birthday of his daughter, Xana Martínez, who died three years ago of a rare form of bone cancer.

“It was a special day for me and my family,” said Luis Enrique. “Obviously we no longer have our daughter with us physically, but she is still present every day. We remember her a lot, we laugh and think about how she would act in every situation we experience ”.

He had previously posted a video on Instagram in which he said that “not only did we play against Germany today, but Xanita would have turned 13.” He wished her “a good day” wherever she was at the moment.

“That’s how life works,” he said after the game. “It’s not just about beautiful things and finding happiness, it’s about knowing how to manage these moments.”

Spain are looking to clinch the top spot in Group E at the 2022 World Cup with a win against Japan tonight.

The 2010 champions need a point to guarantee their qualification to the round of 16, while half an eye will be in the other Group E match between Costa Rica and Germany.

“There was a strange feeling in the dressing room because we had the chance to beat Germany and we let it slip out of our hands and it was a shame, but we have to think that we are at the top of the so-called Group of Death and we have to stay positive.” Spain coach Luis Enrique said before the game.

Morocco had to work hard to achieve it thanks to an energetic Canada, but two goals in the first half were enough to secure their qualification for the round of 16 of the World Cup for the second time in history after a 2-1 victory. .

Riding on the height of their heroic victory over Belgium in their last game, one of the most famous victories in African sporting history, Morocco are the second team from the continent to reach the round of 16 after Senegal booked an appointment with England. , and progress amazingly as group winners.

Belgium’s miserable month ended in further catastrophe, as their failure to beat Croatia means one of the pre-tournament favorites retires, and Morocco become the first African team to reach the last 16 of the World Cup. World as group winners since Nigeria in 1998. But they were made to work very hard for their success by a team from Canada that finished in vain, despite their best efforts.

After a raucous rendition of the Moroccan national anthem at the Al Thumama Stadium that could not have failed to awaken the Arab nation from any lingering slumber, Canada immediately went on its guard.

What the Canadians needed to do if they were to have any chance of playing their first World Cup match was simply to steady the ship, not let in early goals and avoid making mistakes as much as possible.

That’s how close Canada came to equalizing through Atiba Hutchinson!

Most of the Morocco players are crying here! It’s their first appearance in the knockout phase of the World Cup since 1986!

They will face the runners-up in Group E -which includes Spain, Germany, Japan and Costa Rica and ends tonight- at the Ciudad Educación Stadium on Tuesday at 3:00 p.m. (GMT).