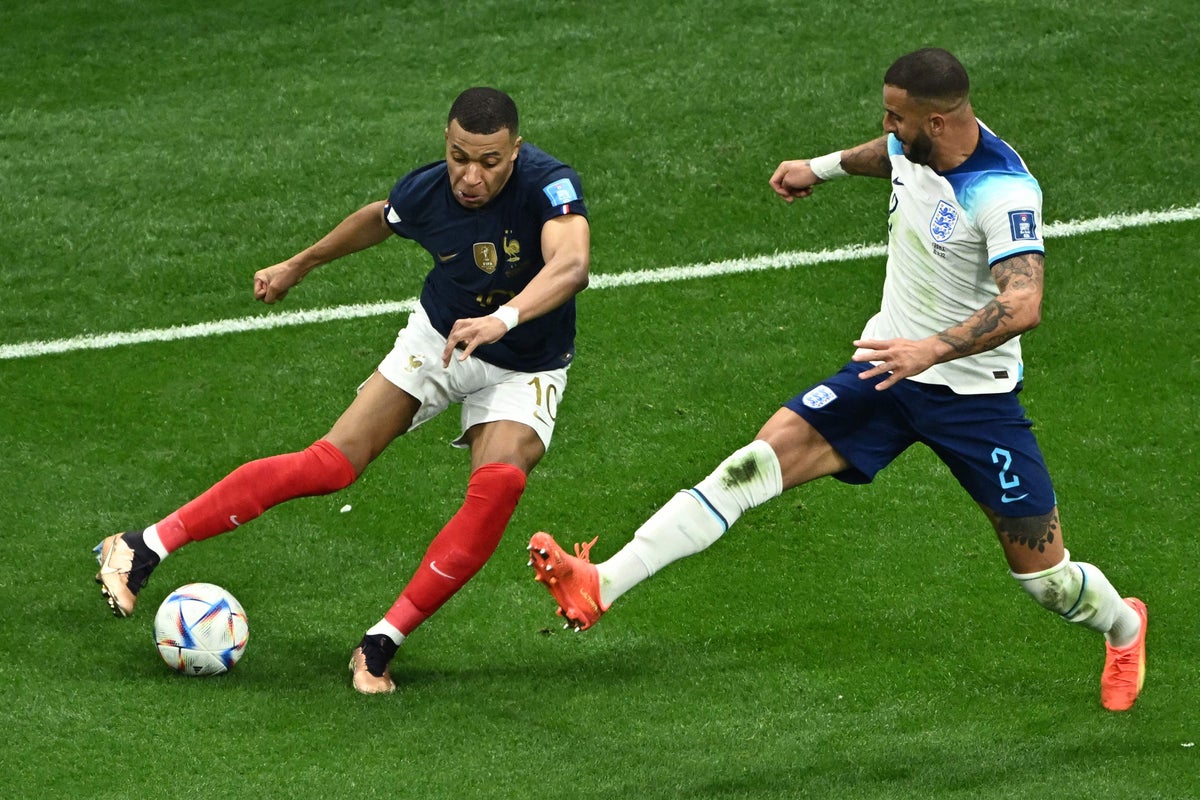 Kyle Walker lowered his head, opened his lungs, and ran. This was exactly the kind of run he was on the team to make, a quick jump across the field to regain position from him, and yet he knew this was a run he had already lost. Kylian Mbappe had not followed him back into deep French territory, and now Mbappe had the ball, he was dribbling and Walker had left his post unattended.

It hadn’t started out this way. France started and immediately switched the ball to Mbappe moving down the wing where Walker met him with a crunch. As France settled on the ball in the initial forays, Mbappe lurked on the fringes, weaving in and out with deceptive little steps while Walker stood cautiously a few yards inside, glancing coquettishly over his shoulder, the two leading their own dance. far. the rest

Mbappé remained in Walker’s sights until he stopped looking. England advanced on the right and Walker went on an excursion. He passed Bukayo Saka and went further, to the French area, looking for a return. He never got there, and by the time he made that long sprint back to his defensive mark, Mbappe had already traveled the field shrugging off Declan Rice’s onslaught as he advanced. There he caught the attention of the England defenders on the edge of the box when Antoine Griezmann assisted Aurelien Tchouameni to fire France’s opening goal.

This was the subplot within the game itself, England’s supersonic defender against France’s hypersonic star, and every time it threatened to erupt into a head-to-head duel between the pair, a fizz of electricity would shake Al Bayt Stadium out of its slumber. . Twice later in the first half, Mbappe ran towards Walker, who directed traffic around him, signaling the runners for his teammates to follow before quelling the threat himself.

For the most part, Walker kept Mbappe relatively calm. But Mbappé is about moments, about flashes of influence, and so it was with France’s opening goal. “He has the ability to make a difference”, Didier Deschamps had said in preparation. “Even in the last game [beating Poland in the last 16], when he was not in his best form compared to the first two games, he was still decisive. And so he was here.

As Walker joined England’s celebrations of Harry Kane’s second-half equalizing goal, Mbappe returned to the halfway line and waved his teammates to follow with a dismissive flick of the wrist. He seemed puzzled, upset, determined. And perhaps it wasn’t a coincidence that moments later, with the score 1-1 and the game on the line, we had the drag run we’d hoped for: 60 yards, a level start, no backup or support.

In an interview for france soccer Last year, Mbappé described Walker as “less explosive when he starts” when asked about fast opponents. “It’s like a tank that picks up speed once launched,” Mbappé explained of his experience playing against the Manchester City full-back. Perhaps that explains why he started and then stopped this run so abruptly, bringing Walker almost to a complete stop, before accelerating away down the wing. Walker was defensive from there, but he did enough to interrupt, if not dispossess him, as they rushed toward the box.

Walker passed the test, but the problem for England was that France carried multiple threats. The argument was always that Ousmane Dembele, Antoine Griezmann and Olivier Giroud are the perfect complements to Mbappe’s genius, with the pace to stretch and make space, the vision to spot runs, the physique to hold the ball and deliver a target. But when Griezmann got his second assist of the game, crossing precisely for Giroud to score the goal that broke England’s resistance, it was tempting to wonder if Mbappe was the lure all along.

After the final whistle England fell to their knees. Walker was the first player to walk into the French celebrations, offering handshakes, and when he reached Mbappé they embraced, a long, hearty hug, an acknowledgment of a shared battle in the war. Finally, they were still.