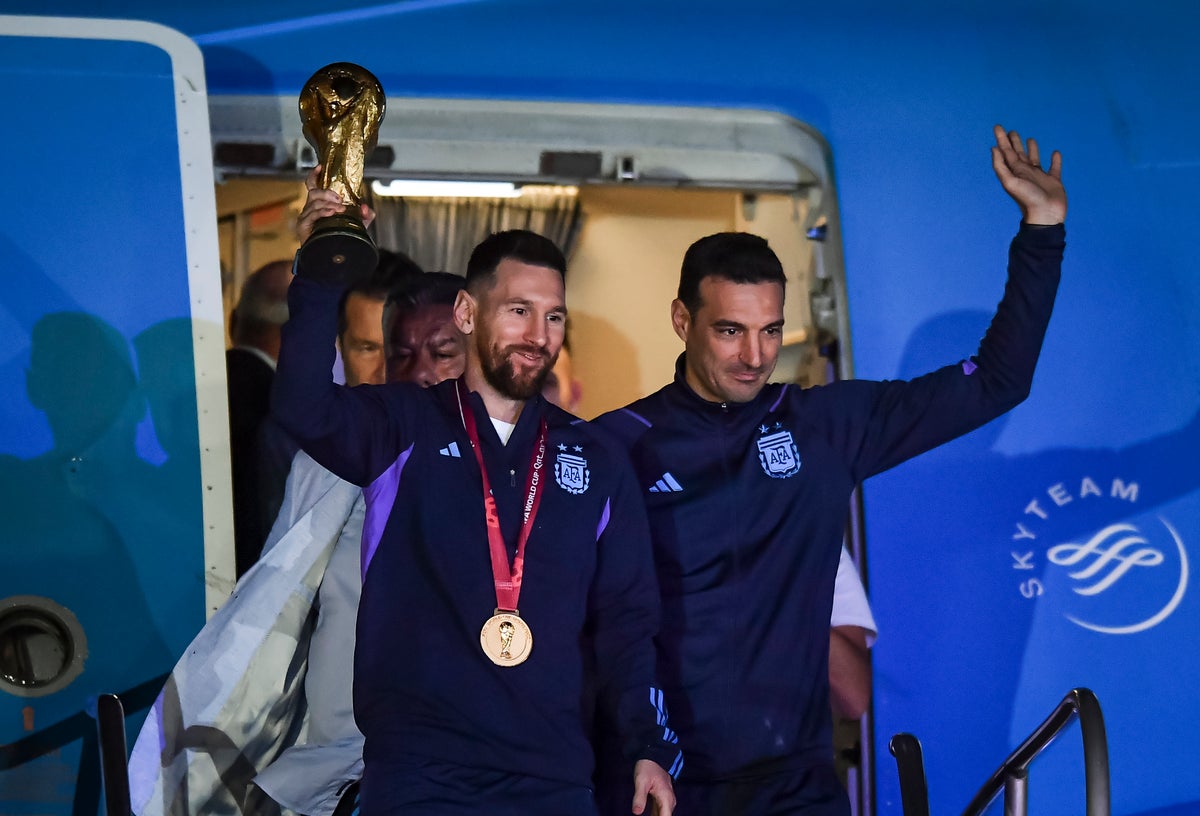 Thousands of fans lined up in the middle of the night to try to catch a glimpse of the Argentina team that won one of the greatest World Cup 2022 finals of all time, ahead of what is set to be a day of celebrations in Buenos Aires.

The team members, led by captain Lionel Messi, were all smiles as they stepped off the plane in Ezeiza, just outside the Argentine capital, shortly before 3 a.m. Tuesday on a red carpet that had been rolled out for the equipment.

Messi was the first player on the plane carrying the World Cup, flanked by coach Lionel Scaloni, who put his arm around the captain as they passed a banner reading: “Thank you, champions.”

The players were greeted by the rock band La Mosca singing “Muchachos”, a song that was written by a fan to the tune of an old song by the band and which became a popular unofficial anthem for Argentine fans at the Qatar World Cup.

The newly crowned world champions boarded an open-top bus and several, including Messi, could be seen singing the lyrics to “Muchachos” as they waited for everyone to get on to the headquarters of the Argentine Football Association.

The bus moved at a snail’s pace as fans, many of whom were waving Argentine flags, thronged the bus on a highway, eager to see the players as law enforcement officers tried to keep them at bay.

The players will sleep at the AFA headquarters for a few hours before boarding the bus on Tuesday night that will take them to the Obelisk, the iconic Buenos Aires landmark that was a sea of ​​people on Sunday afternoon after the The team won the country’s third World Cup, and its first since 1986.

President Alberto Fernández declared Tuesday a national holiday so the country could celebrate the victory.

The day after the streets of Argentina turned into massive parties following Sunday’s victory, many closely followed the flight that brought the players home to celebrate. As the plane approached Argentine soil, nearly 200,000 people followed its trajectory online and news channels provided live coverage of the arrival.

In the afternoon people began to arrive at the airport and outside the AFA headquarters hoping to take a look at the team.

Many were already at the Obelisk, apparently ready to spend the night there and secure a prime spot for Tuesday’s festivities.

Messi celebrated the World Cup on the plane. Nicolás Tagliafico, for his part, published a photo of the World Cup buckled up in the seat of an airplane as if he were another passenger.

As of early Tuesday morning there were no official plans for Fernández, or any other political leader, to take part in the celebrations despite earlier rumors that the players would go to Government House, which was offered for the celebrations, according to the minister. of Security, Hannibal. Fernandez.

The World Cup and the success of the squad led by Messi have brought much-needed good news for a country that has been economically stagnant for years, suffers from one of the highest inflation rates in the world and where almost four out of 10 people live. in poverty.

“Thank you for this greeting, President Putin,” Fernández wrote on Twitter after a phone call with the Russian leader. “Let the joy that today unites Argentina with so many countries in the world serve as an example: our societies need unity and peace.”