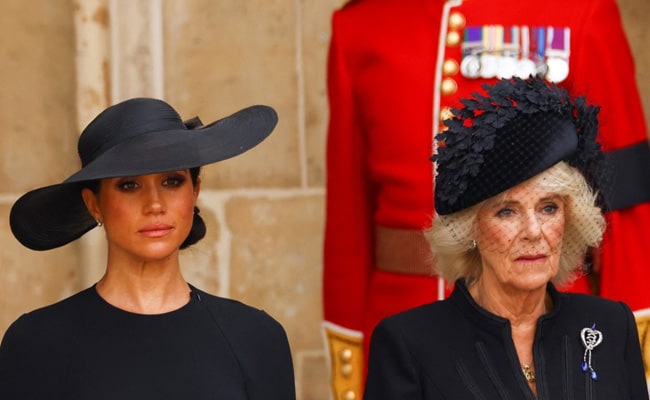 She was seen wiping a tear from her face with her gloved hand and looked solemn.

Meghan Markle was seen with tears streaming down her face as Queen Elizabeth’s coffin was carried out of Westminster Abbey for its final journey. The Duchess of Sussex, wearing a black gown with a cape and wide-brimmed hat, was seen standing behind the royal family as they loaded the monarch’s coffin onto a gun carriage at the end of the funeral, a report in New York Post.

She was seen wiping a tear from her face with her gloved hand and looked solemn. Ms. Markle’s lips trembled as the Queen’s coffin departed for her final journey, to Windsor Castle, the outlet further reported.

Prince Harry’s brother William and his wife and children sat in the front row across the aisle during the funeral Monday morning, while Meghan Markle, 41, sat in the second row with Harry. , behind. King Carlos III and other senior royals.

Queen Elizabeth II died on September 8 at Balmoral Castle, her summer home in the Scottish Highlands. Her health had worsened and for months the monarch, who had carried out hundreds of official commitments until the age of 90, had withdrawn from public life.

Just two days before she died, the Queen was also captured in a photo naming Liz Truss as Britain’s 15th Prime Minister. She seemed weak, but she was photographed smiling and holding a cane.