The NBA’s two biggest offseason questions — the futures of Kevin Durant and Donovan Mitchell — have been answered.

But while the Brooklyn Nets seem on track to run it back with their current core intact, the drama at Barclays Center is far from over.

Will the Durant-Nets partnership survive the rest of the season after such a public airing of grievances this summer? Will Ben Simmons, who still has yet to debut for his new team since being traded to Brooklyn before the February trade deadline, make an immediate impact?

The Nets, just like last season, will surely keep making headlines. So will the Los Angeles Lakers, who welcome a new fiery point guard into the mix. Can Russell Westbrook, buried in trade rumors all summer, now coexist with Patrick Beverley in the same backcourt?

Our NBA Insiders are examining the questions they want to see answered throughout training camp and the start of the 2022-23 season, including what lies ahead for the defending champions’ youngsters, key players returning from injury for the Milwaukee Bucks and Chicago Bulls and MVP contenders who played big minutes at EuroBasket.

KD? Kyrie? Simmons? Will all be well in Brooklyn?

Stop us if you’ve heard this before, but the Nets have a few questions hovering over them heading into the season.

Durant remains in the fold — for now — and Brooklyn is confident its offseason drama can give way to winning basketball. The organization has revolved around Durant since the moment he signed three years ago, but it’s unclear whether the relationship will survive the entirety of the season, let alone the four years remaining on his deal.

We have heard next to nothing this summer about Simmons, who will have been out for 16 months when the Nets begin their season in Brooklyn against the New Orleans Pelicans on Oct. 19.

The Nets announced in May that Simmons had successful microdiscectomy surgery, shortly after the Nets’ suffered a first-round sweep against the Eastern Conference champion Boston Celtics. Brooklyn expects Simmons to “make a full recovery prior to the start of training camp.”

More so than just about any NBA team, the Nets are defined by a series of ifs. But if Durant, Irving and Simmons are all available and on the court this season at Barclays Center, the Nets are capable of becoming the title contender they were projected to be in 2021-22.

Simmons is, in theory, the perfect player to play alongside Durant and Irving. Simmons is a 3-point shot generating force who, according to ESPN Stats & Information research, has assisted on 996 3-pointers in his career, the second most in the NBA from 2017-18 to 2020-21, trailing Russell Westbrook.

A lineup of Simmons, Durant, Irving, Joe Harris and Seth Curry, while light defensively, could be a devastating offensive unit if Simmons is out there creating open looks. Per Second Spectrum tracking, 371 players have attempted 150 wide-open 3s over the last five seasons. Harris, Curry and Durant all rank in the top four on such attempts.

What’s next for Russ, Pat Bev and the Lakers?

The Lakers may be headed for an awkward first day of training camp. There’s clear history between Westbrook and offseason trade acquisition Beverley, even though Westbrook’s attendance and towel assist at Beverley’s introductory news conference suggests both guards are ready to squash any past beef.

After hearing his name in trade rumors all summer, it doesn’t look like Westbrook will be going anywhere, judging by LeBron James tweeting that he “can’t wait for him to go off this season!!” and comments from new coach Darvin Ham expressing support for the 33-year-old guard.

Assuming a trade doesn’t materialize, it’s up to Ham and his staff to revive the superstar trio of Westbrook, James and Anthony Davis after it failed to mesh during last season’s 11th-place finish in the Western Conference. (Ham is also tasked with maximizing Westbrook when the ball is in James’ hands.)

LeBron’s tweet aside, how will the dynamic between him and Westbrook evolve? (Remember that awkward summer league moment when the two sat on opposite ends of the court?)

This type of atmosphere is nothing new for Westbrook, who throughout his career has been fueled with motivation from perceived slights or criticism. Trade rumblings have, for now, been replaced by chatter suggesting he and Beverley can’t coexist in the Lakers’ backcourt.

Lonzo Ball and Khris Middleton injuries: Where does each stand in their recovery?

Both the Chicago Bulls and Milwaukee Bucks avoided making major changes this offseason, each believing their full, healthy rosters can compete in the East.

If Middleton had not slipped on a drive to the basket during their first-round series against the Bulls — resulting in a Grade 2 MCL sprain in his left knee that forced him to miss their final 10 playoff games — Milwaukee believes it would have been on its way to another NBA Finals.

Middleton, who also underwent offseason surgery to repair a torn ligament in his left wrist, is expected to be ready near the start of the regular season. The Bucks are known for their cautious approach toward injuries, so expect Milwaukee to prioritize Middleton getting healthy for the stretch run and playoffs, even if that means tackling the beginning of 2022-23 without its All-Star.

The Bulls’ season, meanwhile, took a turn for the worse much earlier than their division rivals.

On Jan. 14, Chicago was 27-13 and the top seed in the East before Lonzo Ball’s left knee injury. It sputtered to a 19-23 finish and five-game first-round defeat without him. Ball had arthroscopic surgery in January, but each attempt to ramp him up for game action near the end of the season resulted in a setback.

As recently as during the summer league, Bulls Vice President Arturas Karnisovas acknowledged Ball’s health is improving but “probably not at the speed we would like” and the team is doubtful he’ll be ready for the start of the season. The organization has remained vague about Ball’s status and how long his knee issues will linger.

Are the Warriors’ youngsters ready to step up?

Last season, the Warriors enjoyed the perk of slowly bringing along their younger players during their run to the NBA title.

Kuminga and Moody were given small and sporadic opportunities as rookies, filling in for injured players throughout the season and even getting some chances to start. Golden State’s depth let second-year player Wiseman take his time recovering from a meniscus injury in his right knee that ended up forcing him to miss the entire 2021-22 season.

The champs no longer have that luxury.

The Warriors want to see Kuminga use his athleticism to his advantage, most notably his skills as a slasher and finisher. Toward the end of last season, he flashed an ability to draw contact and get to the free-throw line, evidenced by a 10-for-12 showing at the stripe in a blowout win over the Portland Trail Blazers in late February and a 7-for-10 effort against the Memphis Grizzlies in late March.

Golden State envisions Moody as a strong 3-and-D floor-spacer who can utilize his 7-foot-1 wingspan on the defensive end. As a rookie, Moody shot 36.4% from deep on over two attempts per game.

What exactly Wiseman can do is still a question mark. He lacks the sample size of his younger teammates, but Wiseman did have a solid summer league and offered glimpses of how the Warriors want to use him: as a prototypical rim protector who alters shots and grabs rebounds. On offense, he’ll mostly live near the rim, but the team won’t discourage him from letting it fly from beyond the arc on open attempts.

How will EuroBasket impact Giannis, Luka and The Joker? Should teams be worried about wear and tear?

More than two dozen NBA players represented their countries in the latest installment of EuroBasket — FIBA’s European continental championship — including three members of last year’s All-NBA First Team: Antetokounmpo, Doncic and Jokic — all of whose teams were eliminated before the semifinals.

The extra mileage on star players heading into the season could be a concern, particularly with this year’s addition of qualifying games for next summer’s World Cup as part of the lead-up to EuroBasket. But the track record of these stars suggests it hasn’t been an issue in the past. 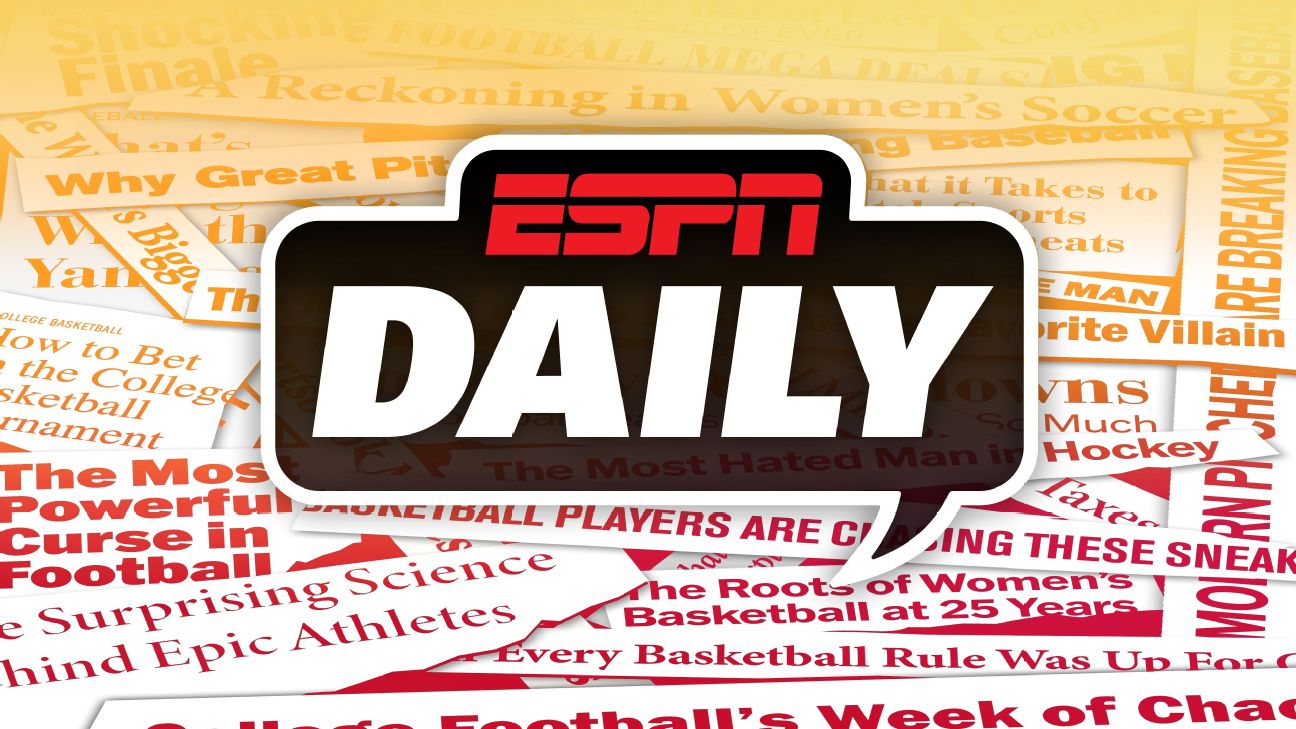 Monday through Friday, host Pablo Torre brings you an inside look at the most interesting stories at ESPN, as told by the top reporters and insiders on the planet. Listen

Jokic last represented Serbia in the summer during the 2019 World Cup. He returned to play all 73 of the Denver Nuggets‘ games in 2019-20, which culminated in a run to the Western Conference finals during the bubble. After Denver was eliminated from the playoffs in the first round, Jokic has gotten an extended break following back-to-back MVP wins.

The last time EuroBasket was played in 2017, Doncic helped establish his NBA potential by leading Slovenia to the gold alongside MVP Goran Dragic. He subsequently became the youngest EuroLeague MVP ever. Because Slovenia did not qualify for the last World Cup, Doncic next took the court for his country in last summer’s Olympics. Although enough time passed after that competition for Doncic to enter training camp heavier than his normal playing weight — which shouldn’t be the case this time around — he showed plenty of stamina taking the Dallas Mavericks to this year’s West finals.

Giannis missed the last EuroBasket due to a knee injury, but played in the 2019 World Cup. He returned from that competition to win a second consecutive MVP, averaging a career-high 29.5 PPG in 2019-20 (since surpassed last season). Giannis too enjoyed a longer-than-usual summer after the Milwaukee Bucks were eliminated in the second round despite his heroics.