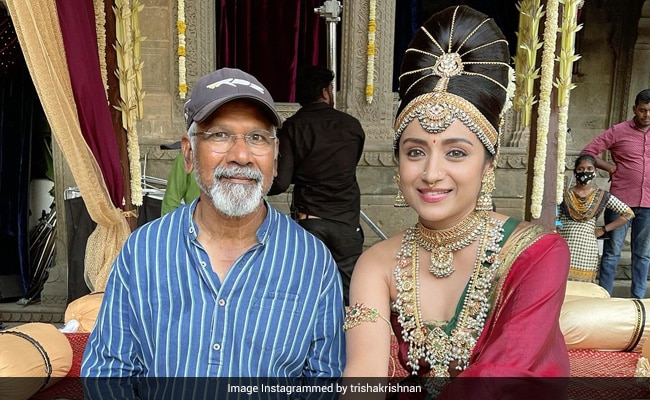 Ponniyin Selvan: meStar Trisha Krishnan has shared photos with the film’s director, Mani Ratnam, on her Instagram account. In the first image, Trisha and the director happily pose for the camera on the film’s sets. Trisha, who plays the role of Kundavai, looks pretty in a traditional pink outfit. She also shared a character photo of her in a white saree. Sharing the photos, Trisha thanked the director for everything. She wrote, “Kundavai and the creator of it. Thank you Mr. Mani for everything. See you in theaters. 30.9.2022.”

Shortly after Trisha shared the post, her fans flooded the comments section. One user wrote: “The art and the artist” while another wrote: “I wish you the best for tomorrow dear Trisha. I pray for success.”

Ponniyin Selvan: me It is based on the famous novel of the same name by Kalki Krishnamurthy, which recounts the rise of the Chola dynasty. The film features an all-star cast, including Aishwarya Rai Bachchan, Vikram, Jayam Ravi, Karthi, and Trisha. In the film, Trisha plays the role of Kundavai, the Chola princess and daughter of Emperor Sundara Chola and Vallavaraiyan’s love interest.

A few days ago, Trisha shared a stunning photo with Aishwarya Rai Bachchan from the sets of Ponniyin Selvan: me. In the caption, she simply wrote, “Ash.” Shortly after she shared the post, fans flooded the comments section. One user wrote, “I don’t remember the queen being able to take selfies! In all seriousness though, you both look amazing,” while others tossed out heart emojis.

Ponniyin Selvan It will hit theaters on September 30.