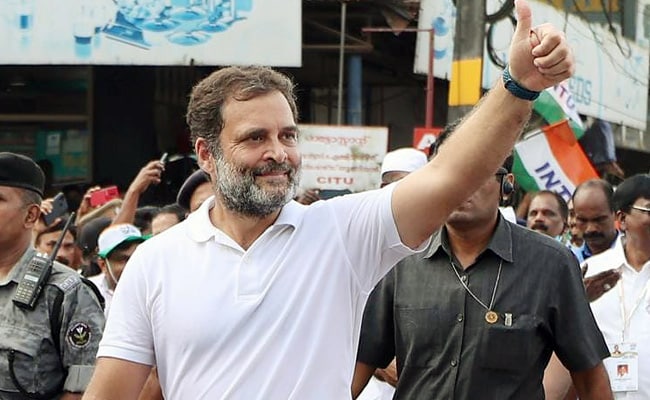 “Why should governors have the right to interfere in opposition-ruled states?” asked Rahul Gandhi.

Congress leader Rahul Gandhi on Thursday accused the Narendra Modi-led government in the Center of ‘using’ governors’ offices to attack states in the country that are not governed by the BJP and claimed it was following their agenda. to promote a nation, policy of a single language in the country.

Gandhi, who entered the state from Kerala, nearly 22 days after launching the ‘Bharat Jodo Yatra’ from Kanyakumari, alleged that the governors were being used to “topple” opposition-ruled states.

“Why should governors have the right to interfere in states governed by the opposition? Are they elected by the people?” he asked her as he headed to a giant rally in Tamil Nadu’s Gudalur tonight.

The DMK government in Tamil Nadu has been at odds with Governor RN Ravi over a number of issues, including his Anti-NEET Bill, which seeks to exempt students in the state from the ambit of entrance testing.

“Have they been elevated to the position of governor by the people? What right do the BJP and the RSS have to overthrow government after government, which is duly elected by the people?” she asked.

Mr. Gandhi also stated that the Center had no right to withhold the State’s share of the GST and that the sum should be released to the States at the appropriate time.

“The states must be partners (of administration) and the central government must keep the states in partnership. But the Center wants to impose a language, a culture for the entire nation. We want unity but at the same time we must respect the diversity of languages, cultures and religions,” said Rahul Gandhi, who paused his speech for a brief moment after listening to evening prayers at a local mosque.

He accused the BJP-led government of spreading hatred, violence and anger among the people and said that Congress would not allow this to happen nor would the party allow any disrespect to any state or language.

During his interaction with businessmen during the yatra, he was told that the Center’s policies, especially demonetization and GST, were “disastrous” for the people. “The GST made life more complicated for businessmen,” said Rahul Gandhi, after wrapping up his 18-day Kerala leg of the Bharat Jodo Yatra.

Praising the beauty of Gudalur in the Nilgiris district, Gandhi said that his sister, who built a house in Shimla, used to describe its natural beauty. “Today I told her that she has not seen the mountain city of Gudalur yet.” The Congress leader entered Tamil Nadu through this city en route to his campaign in Karnataka on September 30. He was joined by dozens of party workers and volunteers in this city in the mountainous Nilgiris district.
“#BharatJodoYatra resumes in Gudalur, Tamil Nadu. [email protected] along with yatries will continue their tireless journey towards a free and prosperous India,” the Tamil Nadu Congress Committee (TNCC) said in a tweet.

Later, addressing a press meeting, National Congress Spokesman Jairam Ramesh said Rahul Gandhi had assured that he would address the issues of small tea growers and returnees from Sri Lanka with Chief Minister MK Stalin. Ramesh also claimed that the Gandhi-led Bharat Jodo Yatra has worried the BJP, which was doing its best to “damage” and “disturb” it. Rahul Gandhi had launched his 3,500 km, 150-day campaign from Kanyakumari of Tamil Nadu on September 7.

The Karnataka leg of the Bharat Jodo Yatra will kick off on Friday, with the Rahul Gandhi-led march entering the state through Gundlupet in Chamarajanagar district.