The further away we got from shooting Mike Zimmer in Minnesota, it seemed like a living hell

For a while there, it didn’t look like the Pittsburgh Steelers nor the Cincinnati Bengals wanted to win their first game of the 2022 NFL regular season on Sunday afternoon.

The Steelers had Joe Burrow and the Bengals right where they wanted them for most of the game. However, Burrow led the reigning AFC champions to a comeback and had the team in the best spot possible to finish the game, but Evan McPherson’s PAT attempt was blocked. 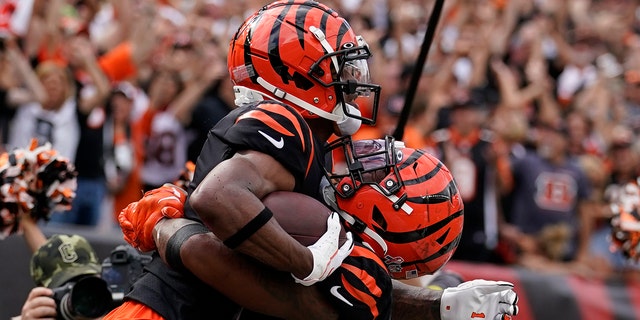 Cincinnati Bengals wide receiver Ja’Marr Chase, left, celebrates with running back Joe Mixon, right, after a touchdown reception by Chase during the second half of an NFL football game against the Pittsburgh Steelers, Sunday, Sept. 11, 2022, in Cincinnati.
(AP Photo/Jeff Dean)

In overtime, Steelers kicker Chris Boswell had his first game-winning field-goal try doink off the crossbar, but his second try was good as time was nearly about to expire.

The Steelers’ defense had Burrow wrapped around their fingers for most of the game. Burrow had three interceptions, including a Pick Six from Minkah Fitzpatrick, and a fumble in the first half. Pittsburgh led 17-6 at the end of the first half, but Burrow led the comeback.

He had two touchdown passes — one to Tyler Boyd and the other to Ja’Marr Chase. The touchdown to Chase at the end of regulation tied the game but McPherson’s kick for the win was blocked. 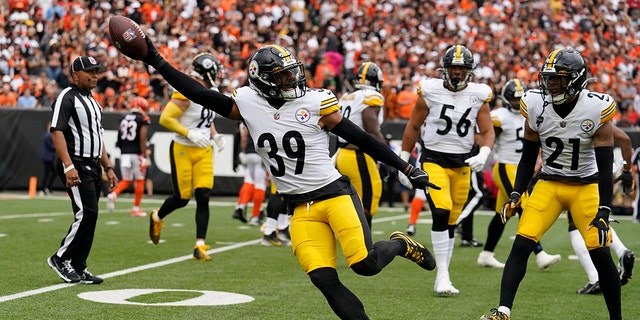 Pittsburgh Steelers safety Minkah Fitzpatrick (39) celebrates after returning an interception for a touchdown during the first half of an NFL football game against the Cincinnati Bengals, Sunday, Sept. 11, 2022, in Cincinnati.
(AP Photo/Jeff Dean)

The Steelers held strong even after losing T.J. Watt and Najee Harris to injuries during the game.

Mitchell Trubisky was 21-for-38 with 194 passing yards and a touchdown pass to Harris. Pat Freiermuth led the Steelers with five catches for 75 yards. Chase Claypool led the way on the ground with 36 rushing yards on six carries.

Fitzpatrick had 14 total tackles to go along with his incredible day. Watt had a sack before he left with what the Steelers reportedly fear is a torn pectoral. 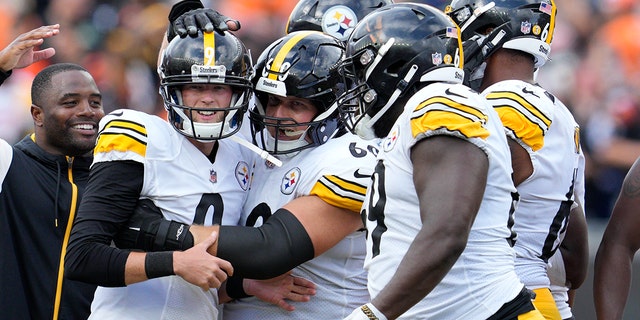 Burrow was 33-for-53 with 338 passing yards, two touchdown passes and four interceptions. Joe Mixon led the way with 82 rushing yards and Chase had 10 catches for 129 yards and the score.

Ryan Gaydos is the sports editor for Fox News and Fox Business. Story tips can be sent to [email protected]

Academy Members to Serve as Seat Fillers at 2023 Oscars Ceremony