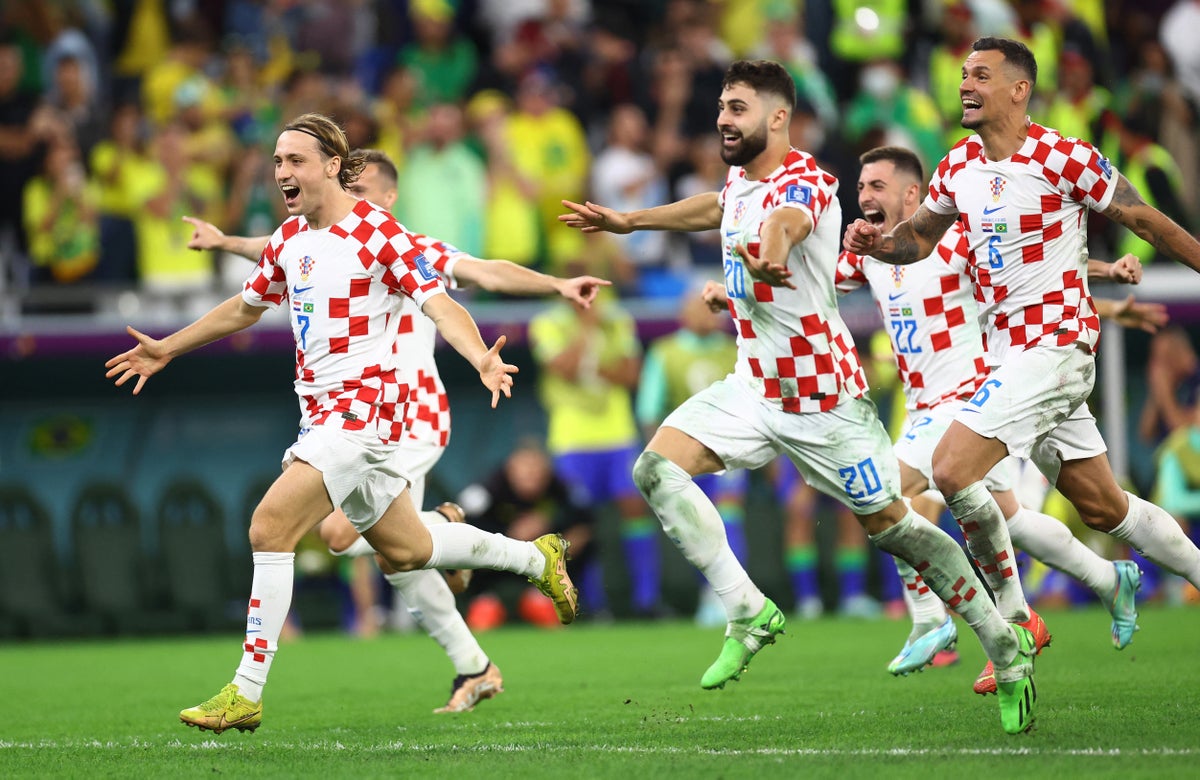 In 1950, as it goes without saying, Uruguay won the World Cup. The crowd at the Maracana when they beat Brazil in what was, in fact, the final is believed to have been around 200,000. In other words, almost 10 percent of the population of Uruguay at that time.

It has proven to be a turning point in world football history, and not just because every World Cup since has had a real final. Uruguay reached the semifinals in 1970 and 2010, the Netherlands three finals, but no smaller country has won the World Cup since. Until now? Probably not, but Croatia, with a population of less than 4 million, is a semifinalist for the second tournament in a row and for the third time since 1998 and has always been underrated. Go back a generation or two and the Yugoslavia team used to be known as “the Brazilians of Europe”, but Croatia eliminated the real Brazilians, and without being able to call on Serbian talent like Dusan Tadic, Dusan Vlahovic, Sergej Milinkovic. -Savic and Filip Kostic, the top Bosnian scorer Edin Dzeko, the brilliant Slovenian goalkeeper Jan Oblak or his teammate at Atlético Madrid, the Montenegrin defender Stefan Savic.

As a country, in its current political entity, Croatia is barely three decades old. As a team, they are the great winners of international soccer. Zlatko Dalic – only the third coach after Luiz Felipe Scolari and Joachim Low to reach back-to-back World Cup semi-finals in 21st century – has channeled his players’ love for Croatia; if the story can be a burden to others, including Brazil, it seems to encourage Croatia. “I said never underestimate us: pride, faith and patriotism,” Dalic said, in what sounded more like a political rallying cry than a tactical plan. “We are great fighters. Only Croats can do that. This is a victory for the new Croatia.” Goalkeeper Dominik Livakovic made a similar note. “We are fighters and we play with all our hearts,” he said.

There are twin threads in Croatia’s superior performance. They produce a disproportionate number of high class players. “Croatia has the best midfield in the world,” argued Dalic, and certainly Luka Modric, Mateo Kovacic and Marcelo Brozovic offer a caliber of passer few can match. They beat Brazil, just as they elegantly beat England in the 2018 semi-final. There’s nothing unusual about seeing Croatian players at Real Madrid, Chelsea, Tottenham, Inter Milan, Bayern Munich or Atlético; soccer is one of their main export industries and, in Josko Gvardiol, they have perhaps the most coveted young centre-back in the world. He got to Qatar on the fast track to the top and seems to have picked up speed.

But there is a second half to this team. In two penalties, Livakovic has saved four penalties to add to his 10 saves during the match against Brazil. He plays for Dinamo Zagreb. So does Bruno Petkovic, scorer in the late draw against the Selecao. Also Mislav Orsic, who set him up. Josip Juranovic, who got the best of his duel with Real Vinicius Junior, plies his trade for Celtic. Nikola Vlasic, who has scored in successive penalty shootouts, is in Torino after disappointing Everton and West Ham. Good clubs all, but not superpowers of the current game. Put a Croatian jersey on each and good if the largely unexceptional players are able to compete in the latter stages of the World Cups. Ivan Perisic, who has scored in five consecutive major tournaments, ranks in the very good category as a club player; as an international, however, he belongs to the group of greats. As Dalic said: “My players are not normal.”

And Croatia has made the abnormal normal. It can be curmudgeonly to point out that they have only won one game in 90 or even 120 minutes. However, they have not been beaten: neither by favorites Brazil, the world’s first team for a long time, Belgium, the conquerors of Germany and Spain, Japan, nor by the other great revelations of this tournament, Morocco.

“Strength of character is part of our team,” Dalic said; so is his own excellence. He gives him a club side and had a good record, particularly in Saudi Arabia and the United Arab Emirates. However, he put him in charge of the Croatian national team and he has progressed where Luis Enrique, Hansi Flick and Tite have failed. He has done it with a smaller group of players, without Mario Mandzukic, Ivan Rakitic, Ante Rebic and Sime Vrsaljko.

Croatia haven’t put in a standout performance to rival their 3-0 demolition of Argentina in 2018. Instead, they have a rematch with them in a World Cup semi-final. “People are surprised by our performance for the second time in a row,” Dalic said. “It’s such a phenomenal thing.” Perhaps a country of its size can never repeat it. But maybe Croatia isn’t done yet.