GPCL will be broadcast live in 95 territories worldwide

Man dies during floods from torrential rains in Croatia 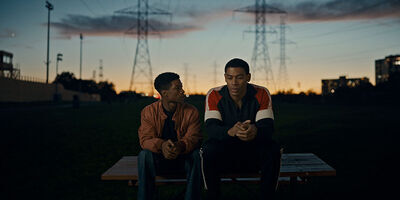 Friday night is when the Toronto International Film Festival explodes as more journalists, industry owners and stars arrive to enjoy all the event has to offer. In one part of town, upcoming theatrical releases like “Bros” and “The Woman King” had world premieres (click for reviews of both), but this year I’ve focused on what might be considered smaller films from this section of, including That little Canadian drama that I hope will turn out to be very, very big.

Clement the Virgin “brother” Is this the wonderful thing all festival-goers want to experience: unexpected excellence. It’s easily the best premiere of the early days of the festival for me. Virgos unabashedly admire Barry Jenkins’ work, particularly “If Beale Street Could Talk”, and I feel like there’s a dash of Steve McQueen’s “Little Axe” movies here too, but he also has the confidence and singing voice of his own. His complex film reveals the grief of lions in a way we haven’t seen often. We have seen many stories of struggle and violence, but rarely do we speak of the emotional and even physical toll it takes on loved ones and the entire community.

“Brother” is a touching drama about a young man who is somewhat forced to be a patriarch – he protects his younger brother whenever possible – but who is also a vulnerable human in his own right, someone who knows potential danger around every corner. However, he refuses to look down in shame or back down in fear. And then the Virgo text, based on David Charandy’s book, reflects that he and another young man, a brother, were forced to be a protector as well.

Aaron Pierre (“The Underground Railroad”) plays Frances and Lamar Johnson (“The Hate U Give”) plays his younger brother Michael. They are Jamaican-Canadian boys living in the Toronto area known as Scarborough in the 1990s, as violence began to rise in their community. Their mother Ruth (Marsha Stephanie Blake) has to work late hours to put food on the table, and so Francis becomes a guardian of sorts, as Michael protects the young man when he’s scared and teaches him how to be a man. Meanwhile, the film traces Michael ten years later, revealing early on that Francis died in that half of the film, and that Ruth has been nearly rigid with grief ever since. When Aisha (Kiana Madeira), Michael’s old friend, returns to see them, Ruth barely moves. Michael says she doesn’t talk much, and Johnson strikingly bears the weight of a person forced into stagnation not only by grief but to protect his mother. The difference in body language between a naive young Michael and the one still haunted by his brother’s death is subtle yet captivating.

See also  Theo's Sword: What We Know About Its Sauron Connection & Why Adar Wants It

There are just as many details as those in “Brother,” from the charming sound design to the beautiful tone by Todor Kobakov (obviously intended to remind Nicholas Brittel, but he did) to the way Virgo captures the geography and feel of its setting. . It is very good at conveying the location of people somewhere, whether it is the apartment we know well, the dangerous streets around it, or the party where these turbulent characters are growing up, smiling and moving. There’s such a flair for filmmaking here, bouncing back and forth through time, building as a thrill over the realization that Francis is going to die but never losing sight of his characters along the way.

It really helps to have talents like Pierre and Johnson and Blake and Madeira in a four-character piece for pretty much most of the runtime – and it should be noted that Lovell Adams Gray is also very good at a crucial role in the final chapter as well. Pierre is a captivating performer, someone with an incredible physical presence but also a deep emotional undercurrent in his body language and those eyes. He realizes that Francis is at that age when he wants something more than a predictable future from meek work and that he is increasingly frustrated by the disappointments in his life. Johnson matches his victory to defeat, as he sees how Francis takes greater risks and realizes that his brother’s confidence may soon be dangerous. Then there is Blake, who conveys deep sadness and shock in a way that never feels manipulative.

“Brother” is the kind of movie I wish a major distributor would have, but the concern will get stuck in the festival circuit and never expand. It’s very good to let that happen. This movie deserves your attention.

Of course, it pays to have a star if you’re trying to get over that hump to a wide launch, and Gabe Polsky “Butcher Crossing”He has a blockbuster in Nicolas Cage, riding a wave of acclaim for films like “The Pig” and “The Unbearable Weight in Huge Talent.” The Cage here isn’t quite as faint as House of Art in recent years, but there will also be no YouTube clips of his performance. It’s somewhere in between and, unfortunately, a little inconsistent. He never discovered the degree of danger this Western villain posed, but this is mostly the product of a film that is too inert and too superficial to delve into the deep philosophical underpinnings of its source.

Co-authors Polsky and Liam Satre-Meloy adapted the beloved 1960 novel by John Williams, one of the first books to deconstruct the Old West in literary form – I haven’t read the book but done some research to see how it differs and saw some comparisons to Cormac McCarthy if you search about tone. The story is set in the 1870s as travels to the West begin to yield fewer and fewer positive results. Yet that area still has that drawing, even for a Harvard kid named Will Andrews (Fred Hechinger), who left everything behind to find a goal in the Rocky Mountains. (In the book, he appears to have been inspired by Ralph Waldo Emerson.) Of course, anyone who has seen a Western knows that a city kid will learn a thing or two about the brutality of rural life.

Will meets a buffalo hunter named Miller (Cage), an imposing figure who talks about a valley he once found littered with thousands of beasts, enough to retire from the profits made by selling their hides. Will agrees to fund a fishing trip and the pair go out with two other travelers, a bible hitter (Xander Berkeley) and a wild card (Jeremy Pope). Academy Award nominee Paul Rashee and gorgeous Rachel Keeler play relatively under-the-hood roles in the city, but the majority of the movie consists of four men on the road, and at least one of them may not be quite right. I’ll give you one guess.

“The Butcher’s Crossing” isn’t a frustrating job, but it does have one fatal flaw that the protagonist is a kind of black hole. We simply don’t know enough about Will to care what happens to him, and his progression from Harvard kid to buffalo hunter feels just a function of the plot. This isn’t Hechinger’s fault, and I bet the character is richer on the page, but this feels like an adaptation hitting plot points from its source while missing most of the meaning between the lines.

A similarly lackluster quality reigns over Stephen Frears “The Lost King” The Oscar-nominated director meets the co-writers of his Oscar-nominated “Philomena,” Steve Coogan and Jeff Pope. They adapt the true story of Philippa Langley (Sally Hawkins), a divorced mother of two who becomes obsessed with correcting the record and finding the remains of King Richard III. There is some great material here about revisionist history – the idea being that people have come to terms with Shakespeare’s version of the warped usurper king – and how it sometimes takes a unique person to right the wrongs of the past. All is perfectly fine in terms of true storytelling – the kind of “did you read about the housewife who corrected Shakespeare” tale one might tell over a drink – but sometimes legend is more interesting than truth.

We meet Philippa at a job she hates with her ex-husband (Kogan) who takes his kids on his way to online matches. She is also dealing with a physical illness of her own, which brings her closer to the story of Richard III after she saw a play with her eldest son. Was it really distorted? Was he really an illegitimate leader? Suddenly, she saw Richard everywhere, literally. He chases after her when she becomes involved with the Richard III Society, a group of amateurs who sit and talk about what went wrong in history about the King but who don’t seem to do much about it other than angrily raise a pint. Langley is ready to act even when historians and bureaucrats try to get her out of it.

At its core, “The Lost King” is an underdog, the tale of a woman who’s been pushed around by men who seem happy to tell her she’s wrong. Expected to be strong, Hawkins has found Philippa’s balance between frustration but growing confidence. People who love the movie will largely do it for what you give it to you. Her work has been nearly enough for me, but it’s a classic case of the true story, and the book that first told the true story is probably more interesting than the movie about it.

Thunderbolts: Each Member’s Most Heroic Act In The MCU

GPCL will be broadcast live in 95 territories worldwide

Man dies during floods from torrential rains in Croatia

Thunderbolts: Each Member’s Most Heroic Act In The MCU

Drishyam 2 Preview: The Return of Ajay Devgn as Vijay Salgaonkar, and a Recap