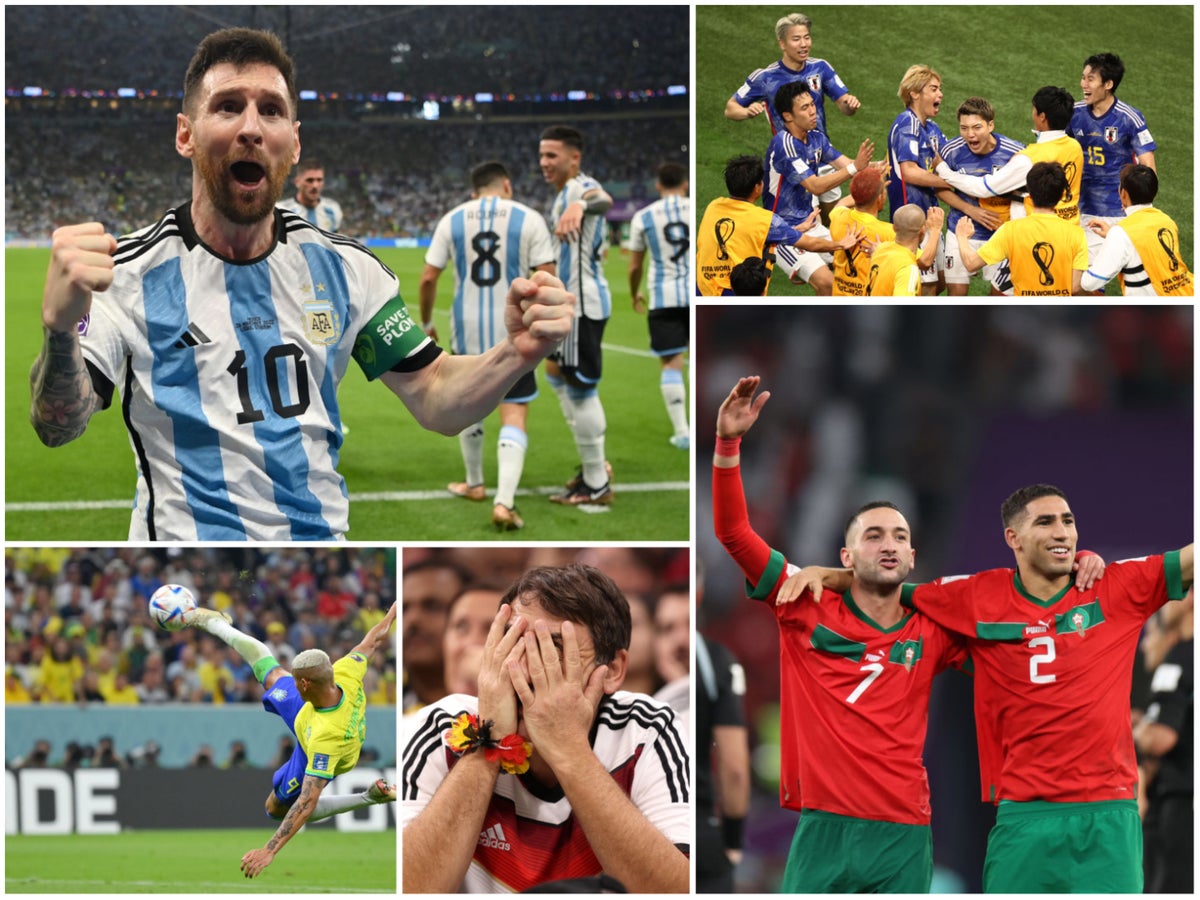 and breathe After 17 days of non-stop football, the World Cup pauses before the quarter-finals in Qatar. Amid the controversy and ongoing human rights concerns surrounding the host country off the pitch, it has been an exciting ride so far, with plenty of surprises and a series of exciting matches to light up the tournament.

The group stage can be remembered as the most unpredictable ever in a World Cup, with Saudi Arabia upsetting Argentina, Japan upsetting Germany and then Spain, and Tunisia beating defending champions France. Several of the groups went down to the last day, and in some cases final minutes, setting up a diverse line-up for the round of 16.

There have been moments of inspiration from star players including Lionel Messi and Kylian Mbappé, as well as sublime team goals scored by the Netherlands and Brazil. England have also impressed and are the tournament’s top scorer heading into the quarter-finals, with Gareth Southgate’s side facing France on Saturday.

Morocco produced the round of 16 result when they defeated Spain on penalties, and will be looking to become the first African team to reach the World Cup semifinals when they take on Portugal. Cristiano Ronaldo has already made history by becoming the first man to score in five World Cups, while Argentina appears to be on a collision course with Brazil in what is Messi’s latest World Cup.

Here are some of the best World Cup moments so far, as nominated by the independents writers

The way in which Germany’s admirable gesture of silence has drawn angry responses reflects a bigger victory than anything else that has happened on the pitch, but ultimately it is about the pitch. There are plenty of moments, the World Cup transcending its troubled stage in the way it often does, from Morocco’s rise to Richarlison’s stunts. However, in terms of its historical weight and emotion, there was something even more momentous about Leo Messi’s goal against Mexico. The coup itself was divine, with its beauty all the better because it was such a defining moment, rescuing Argentina after the shock of Saudi Arabia and setting them on a new path, perhaps destiny. Fittingly, in the moments after such a launch, Messi showed his relief in an even more grandiose way. “Thanks Diego”. It was a moment of private prayer, in the midst of the most raucous public atmosphere.

Ghana against South Korea might not have stood out on the match list. But, like the Cameroon-Serbia game that afternoon, it was high drama and a prime example of what the World Cup should be, a chaotic classic played by teams from different continents who rarely meet, amidst an atmosphere of mutual enthusiasm. Ghana took the lead, South Korea fought back, standout Mohammed Kudus scored the game-winner and Son Heung-Min ended up crying, thinking his team was out. And in the end, they qualified for the round of 16 and the convincingly funny Ghanaians didn’t.

Ghana had promised to withdraw Luis Suárez from the World Cup, to exorcise the “devil himself” from this great tournament forever. 12 years after he broke their hearts with his hand in the quarter-final in South Africa, this time they got as close as possible how South Korea’s late goal sent Uruguay, and their longtime talisman, to ruin. . There were tears from Suárez as the bitter reality of knowing that this could very well be the case at this level began to sink in. Ghana may not have pulled through as they had hoped, but after more than a decade of waiting for a measure of revenge this, as far as second prizes go, was as good as they could have wished for.

The climax of Group E, with Spain losing to Japan and Germany simultaneously beating Costa Rica in a thriller, but to no avail. That brief period in which both Spain and Germany were exiting almost defied belief, especially considering how the Spanish had started their campaign so convincingly against Costa Rica. Throw in the added drama of Japan’s winner being scrutinized late into the night and you had one of the most gripping nights of football in recent memory – and even World Cup history.

By the third day of the tournament, the World Cup had not yet come to life. But the first of the first games, Argentina vs Saudi Arabia, delivered in a way that virtually no one would have anticipated. Argentina, on a 36-match unbeaten run, went to half-time on a Lionel Messi penalty but had to mourn a series of missed chances as Arabia’s daringly brilliant style of pressing led to two goals in five minutes of the second half. half. . With their backs against the wall, the 51st ranked team in the world fought for their lives to secure their most famous victory in front of an incredulous crowd at Lusail Stadium and millions of spectators around the world. A World Cup surprise of all time, and surprises have continued in abundance.

You won’t see a better team goal at the World Cup than the opening goal scored by the Netherlands in their 3-1 win against the USA. Louis van Gaal’s team had struggled to live up to the expectations. expectations as they progressed to the round of 16, but he ultimately marked his return to the World Cup in style with a beautiful, fluid passing move that involved all 11 players and was finished off by Memphis Depay. It was perfection, a stunning illustration of cohesion, movement, and understanding of space. That he was scored by the Netherlands seemed to raise his quality as well. He felt good.

Morocco has been a revelation, taking up the mantle of underdog that captures everyone’s heart. They are likely to be the history of this World Cup, as they topped a tricky-looking Group F ahead of Croatia and Belgium before dramatically shocking Spain on penalties in the round of 16 with a mature and dogged performance in which they came within the height of the party Red Fury. He has conceded just one solo goal in Qatar and has glorified himself in the role of ‘brave team no one wants to face’. They have united a region and a continent, while getting into the European-South American hegemony of the quarter-final line-up feels important in terms of world football. Now I would love to see them become the first African team to reach a World Cup semi-final.

The group stage finale was spectacular across the board and while the drama surrounding Japan and South Korea’s progress was sensational, the battle between Poland and Mexico (and Saudi Arabia) provided brilliant madness. Fans were quick to tally disciplinary points with the group just 30 seconds from being decided with yellow cards and Poland knew it: Grzegorz Krychowiak was tactically eliminated after his late yellow card. Before all that, Luis Chávez announced himself as the deadliest set-piece taker in the game with the perfect shot and another near miss, then El Tri frantically pushed for that vital third goal, only for Salem Al-dawsari to squash your hopes deep. discount time with the sucker punch. End-to-end mayhem and thrilling entertainment.

Best goal: Brazil needed a moment of inspiration, so Richarlison stepped forward. The Tottenham striker had already broken the tie against Serbia after a rebound, before giving the Selecao a run-off with a real run-off. Following Vinicius Jr’s cross, Richarlison’s first touch set up the spectacular overhead volley, which he executed to perfection as he slammed the shot into the corner. A brilliant moment. Brazil also had a goal of the tournament competition between them as they overcame South Korea and reached the quarterfinals, putting on an impressive display of what Brazil means to the World Cup.

Rashford is reborn: Compared to many teams around them, England enjoyed a calm and collected group stage as they qualified with a resounding 3-0 win over Wales. Despite the boos that followed the goalless draw with the USA, England were never in serious danger of elimination, but they still needed something special to break the tie in the British Group B clash. Rashford’s free-kick, taken from 25 yards, was that moment and the striker’s second goal later in the match brought him within three overall in the tournament. Rashford’s journey from rock bottom to a player reborn at the World Cup was the biggest story of England’s group stage.

The Irish leave their mark in Qatar: In a bizarre moment caught on French television while a Les Bleus fan was discussing football, a rather delusional Ireland fan barged into the interview and blurted out his best French, or perhaps a way of life: “Je suis un baguette!